As the UK’s oldest and largest ambulance manufacturer, we’re proud to announce our official, successful turnaround after posting profitable results for the first time since 2017, only 18-months after our acquisition by Venari Group.

O&H Vehicle Technology’s figures for the period ending February 2021 highlighted revenues of over £27Million, providing a £2.0Million EBITDA and a £1.4Million PBT. Order books remain healthy with continued financial improvements forecasted for the trading year ahead and exponential gains in innovation for products due for imminent release.

At the start of 2019, the former O&H owners drafted in industry name, Oliver North, as its new managing director to drive the company back to prominence. It quickly underwent a rebrand, a wholehearted cultural transformation and a reinvigorated approach to quality and self-sufficiency.

In August 2019, North spearheaded a management buyout (MBO) of OHVT alongside Ken Davy, in-turn providing significant investment into innovative product development and modern, efficient machinery. In conjunction with the MBO, Venari Group was established as the new parent company of OHVT to provide a strong, fresh identity with a new 60,000sq ft headquarters in Brighouse, West Yorkshire in addition to OHVT’s 64,000 sq ft production facility.

James Houston was drafted in, in early 2020 as the firm’s new Group Finance Director with the clear intention to create the most financially sustainable ambulance manufacturer in the United Kingdom, alongside significant advancements in governance and compliance.

In 2020, Venari and Ford of Britain formed an official alliance to develop the world’s most technologically advanced, ‘game changing’ lightweight ambulance, in answer to NHS ambulance trust’s calls for an increase in technology with a lighter, more agile footprint. The project has been managed by experienced Technical Director, Wes Linton, alongside a newly formed Venari engineering team and Ford of Britain’s leading design engineers and is one of the ambulance industry’s most eagerly awaited product launches.

O&H managing director and Venari Group CEO, Oliver North, commented, “I couldn’t be more thrilled to announce O&H’s return to full health after a relentless few years of significant improvement. But as the UK’s oldest and biggest ambulance manufacturer, and at a time when job creation and improvements in British manufacturing are needed more than ever – it is a job which has proven to be worth fighting for.

“The team, throughout every corner of production, management and support roles, has been transformed into what I’d say is unarguably the most passionate in the industry, and it shows in abundance with the return of O&H to a full bill of health. We can now present the best case in decades to our NHS as to why we do not need to import ambulances built outside of the UK any longer.”

Group finance director, James Houston, added, “Joining a company in turnaround was always going to prove exceptionally challenging but then to add in effects from the pandemic, it required an extra layer of resilience and sheer effort from everyone. As a board, we’re genuinely obsessed with ensuring OHVT and Venari as a group can assert and solidify itself as the number one emergency vehicle builder in the UK.

“O&H Vehicle Technology’s figures now show that we’re officially, once again, the largest ambulance manufacturer in the UK, and it is a position which all of us at the company will strive to consolidate and build upon in the years ahead.” 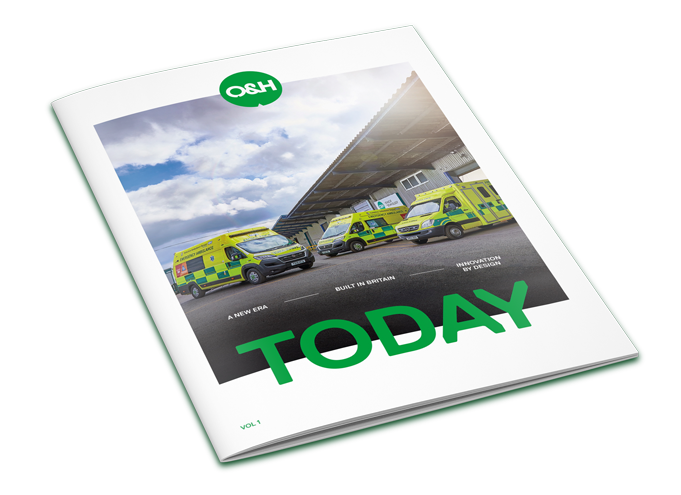